Since it seems like some liked to see the differences between Flyknit sample and production models I thought that given I can also do the same with the newly re-released New Balance 997 I would. This shoe means a lot, and it’s been a while coming. Any doubters can gladly read my love letter that Sneaker Freaker published. I may warn you though, the following is incredibly dull and uninteresting to pretty much 99.9% of the earth’s inhabitants. 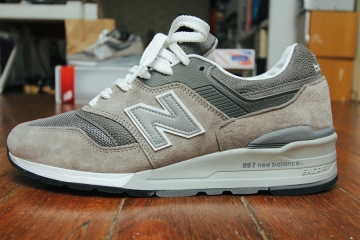 Even though the most obvious difference is a revised midsole colour (a fact that was unbeknownst to me at the time of writing my article) there are actually a whole host of less obvious but markedly different details. When holding both shoes in hand it’s quite obvious to pick up on them. For starters the tongues are vastly different, the production version has lost a good half inch to the sample and as a result the shoe looks a bit less aggressive. I’m not one to be into the whole big tongue look but on this shoe the long tongue was definitely a feature, much like the later 998. When paired with a reduction in heel profile though the overall stance is drastically different. Upon closer inspection many of the panels have been tweaked, with a lot of corner radiuses being opened up (no doubt making an easier cut). All of the sample’s moulded parts are much more crisp and defined, I’m assuming due to the fact that the moulds were much less heavily used at the time. Aside from tongues the other really noticeable change is the pebbled patten on the leather is much more prominent on the released version. The truth of the matter however is once you slip them on your foot you’re still getting the same amount of cushioning Bill Clinton got in ’92 and that’s a lot more than can be said for other retro models out there now.

Meanwhile on a much more flippant subject, I’m not sure whether I can convince myself that Mark Mcnairy’s F.O. Pinky Ring is something that I would ever use. I have already forgone the period where I was convinced that some point in time a pair of “proper shoes” would be suitable so it’s probably pretty slim. In the meantime I should probably just get myself a zip jacket adorned with the late Mikhail Kalashnikov’s Ak-47 rifle. Leave it to the quietly spoken Kazuki to stick images of assault rifles all over outerwear. It’s funny to think  about the empires that have prospered and fallen on the back of this one weapon. For something designed with an intention to maim and kill it’s somewhat endearing. 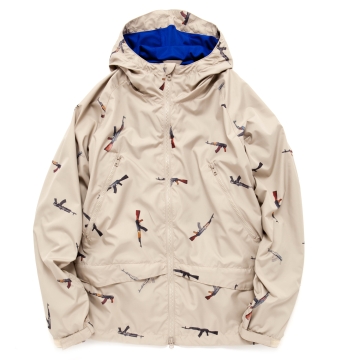 One thought on “Footwear and Assault Rifles”