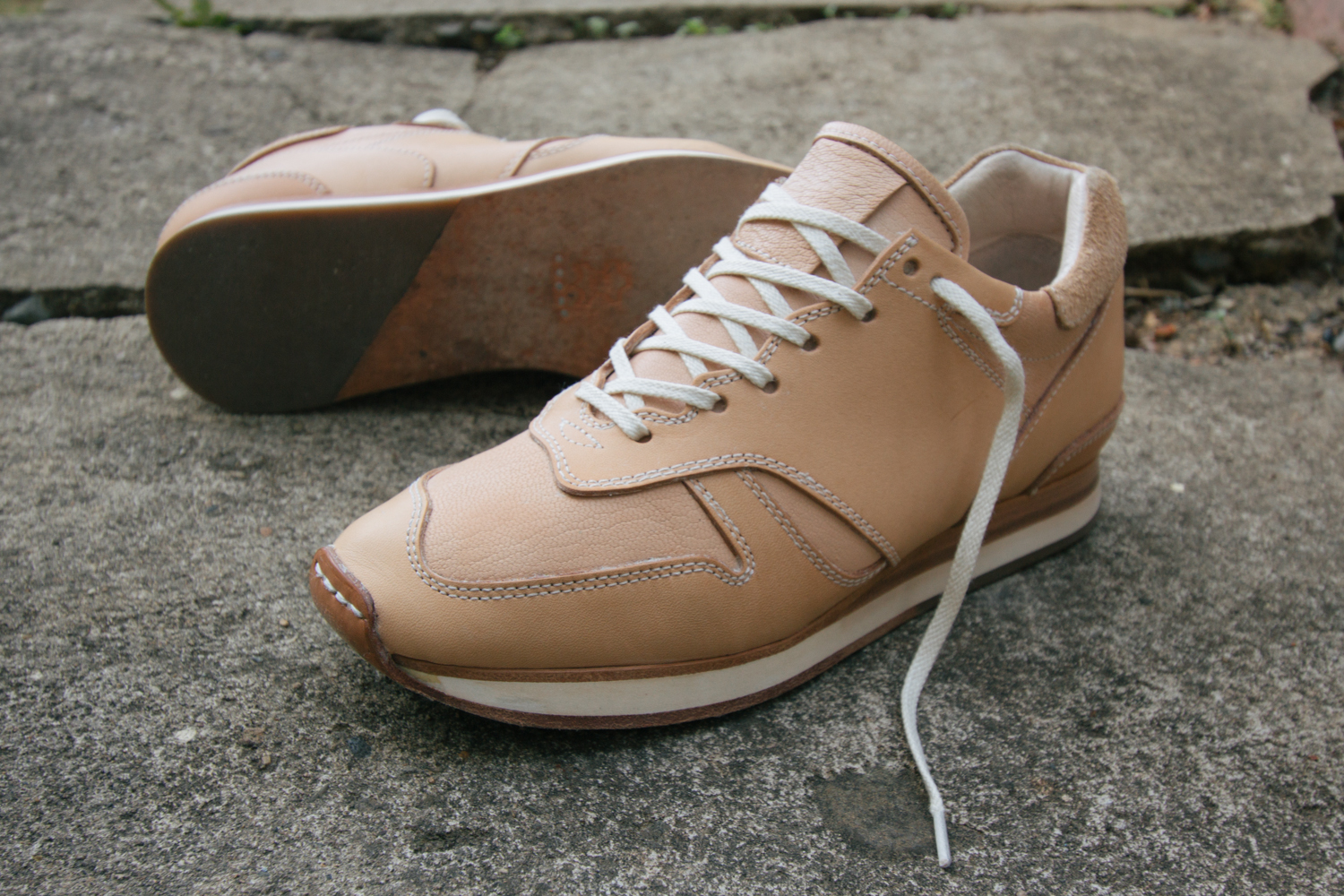 A good 6 months or so into owning a pair of Hender Scheme MIP-08 I was bored enough to take some pictures to document how they’ve been progressing. Having only worn them occasionally there’s not the crazy amounts of ageing some of the Japanese brethren manage on a pair in 6 months but the sporadic wear also gives a decent bit of context to how much they actually have changed with just a bit of wear and one leather treatment. Digging up some old pictures of what they looked like before hitting my feet shows that things definitely have progressed from their “European tourist at the beach” hue beginnings to a much more “healthy” colour as most mums would put it. Up There’s images are also a decent reference for the start point. 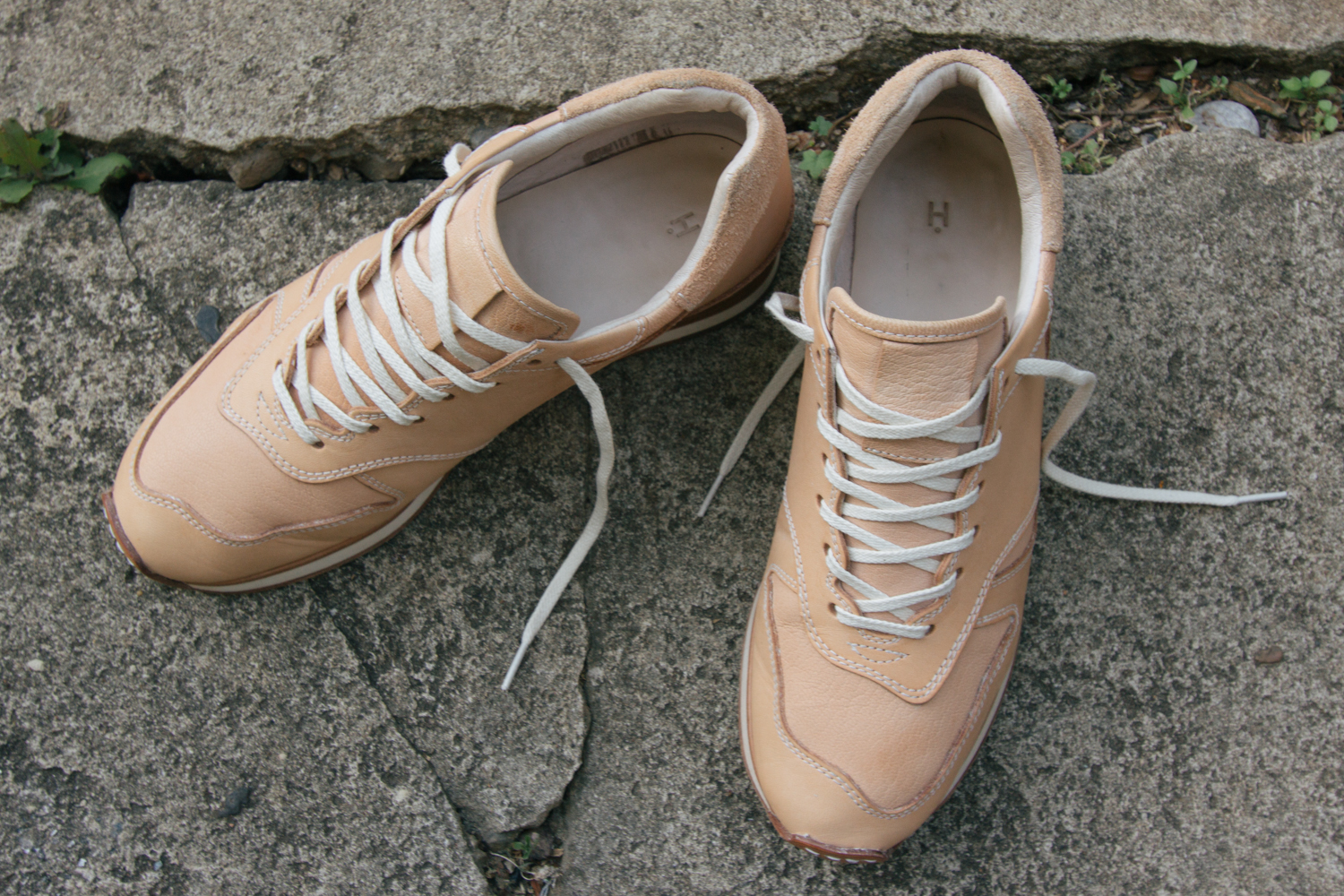 Whilst initial wear definitely did add some character (using the leather laces made some early marking on the tongues) the real tipping point was when applying the moisturising cream. The act itself is weird enough given that the shoes do show a noticable ‘dried out’ feel when time passes and slathering them in the cream takes a fair bit of confidence in the product. The first few moments are sure to freak anyone out as the hue goes from light skin to a deep brown as the hide soaks up the product, there’s definitely no turning back after that. Luckily it does lighten considerably as the shoe soaks up the moisture though. What’s amazing is that it definitely does make them more supple and changes the tone very slightly bringing out all the small marks and fine details from the wear in the process. I’ve referred to the Hender Scheme footwear as being “like raw denim but for leather shoes” and this similarity to the infamous “first was” backs up that thinking. 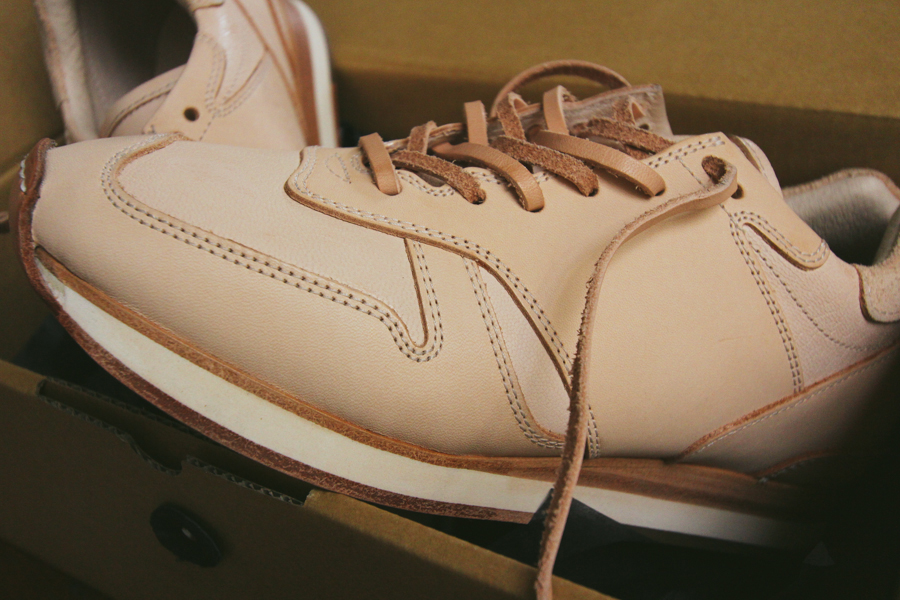 The change in tone was enough that I decided at this point to switch out to the white cotton laces for some contrast. The most easily illustrated example of the shoes colour changing (given the variance in photos) is how much more pronounced the white stitching throughout the shoe is now, as well as the darker leather accents being less contrasting. 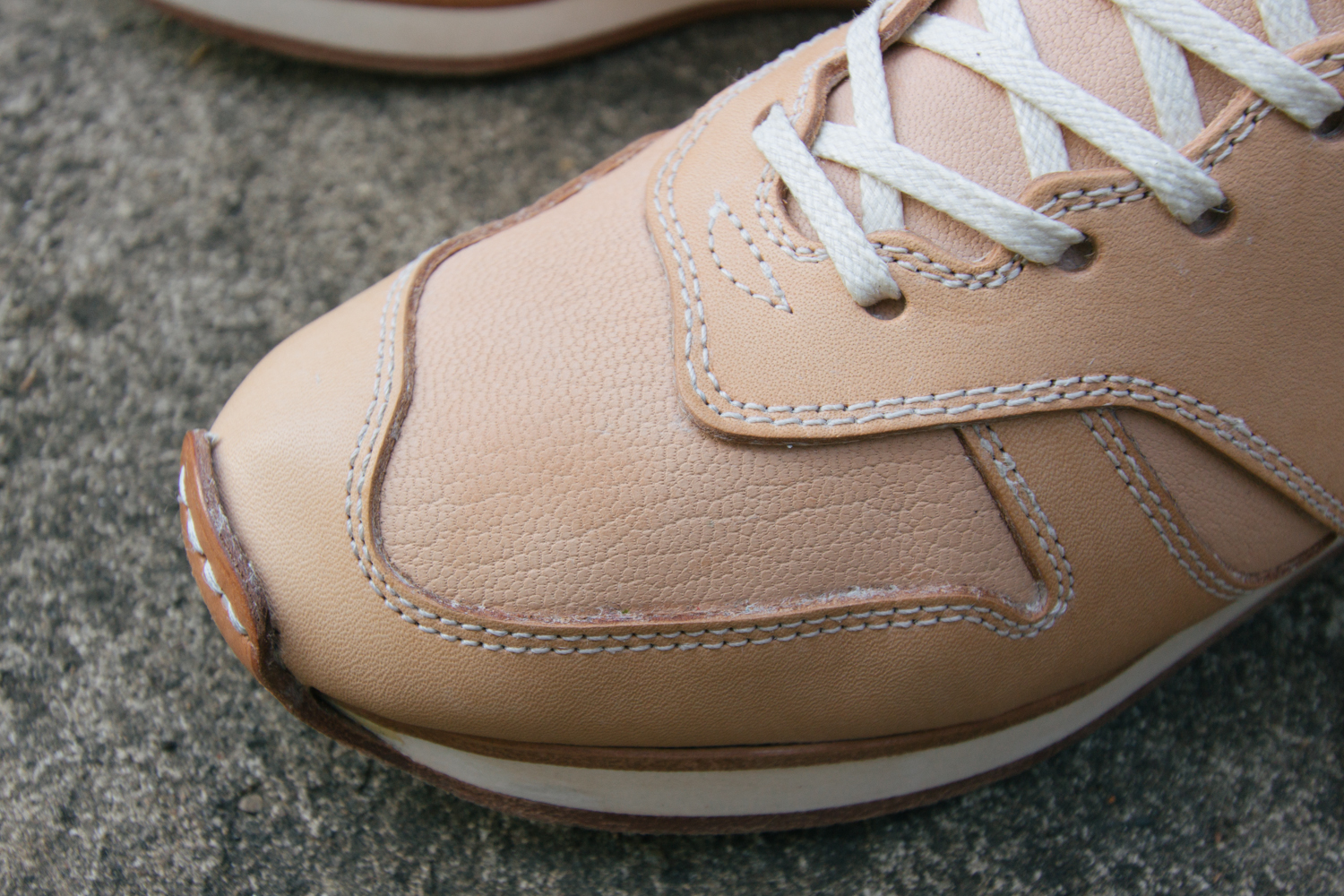 With the more supple leather  characteristics comes a much nicer feeling shoe on foot as well, these aren’t what you would call forgiving when you first get them especially given the typically Japanese choice of forgoing traditional sizing in lieu of a simple 1 thru 5 system. It’s like Japanese apparel sizing all over again! Generally speaking though these will grow with you it just takes a bit of pain in the beginning. They really do have an unusual characteristic of feeling almost like they’re “alive” with the uppers needing attention and the way that the shoes stretch and shrink with the temperature and wear. Whilst most shoes tend to feel tighter by the end of the day as your feet swell, these will happily stretch to accommodate with the heat and moisture (gross) and after sitting unworn for a day they’ll tighten back up when you come to wear them again. An odd and sometimes unnerving practice when you put them on and they feel too small but you get used to it. 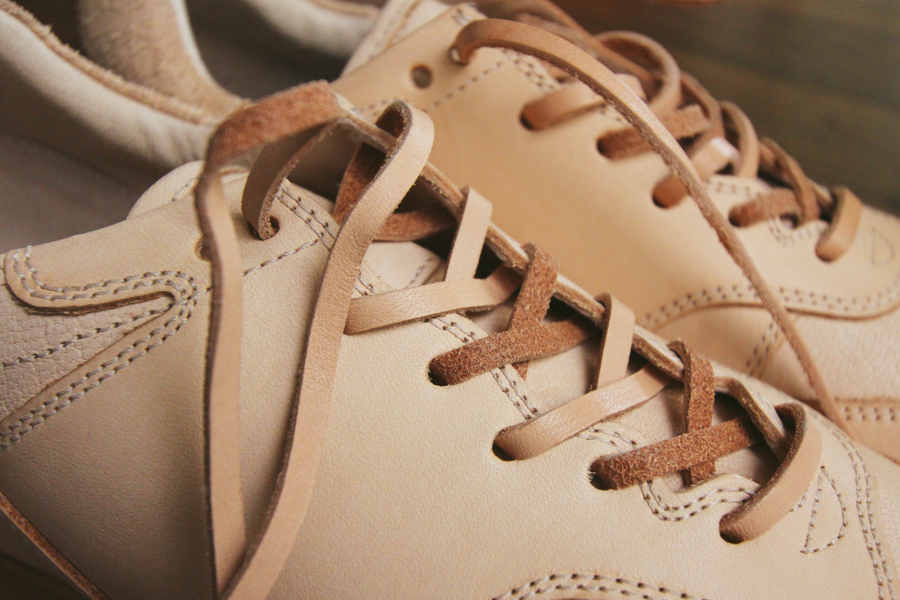 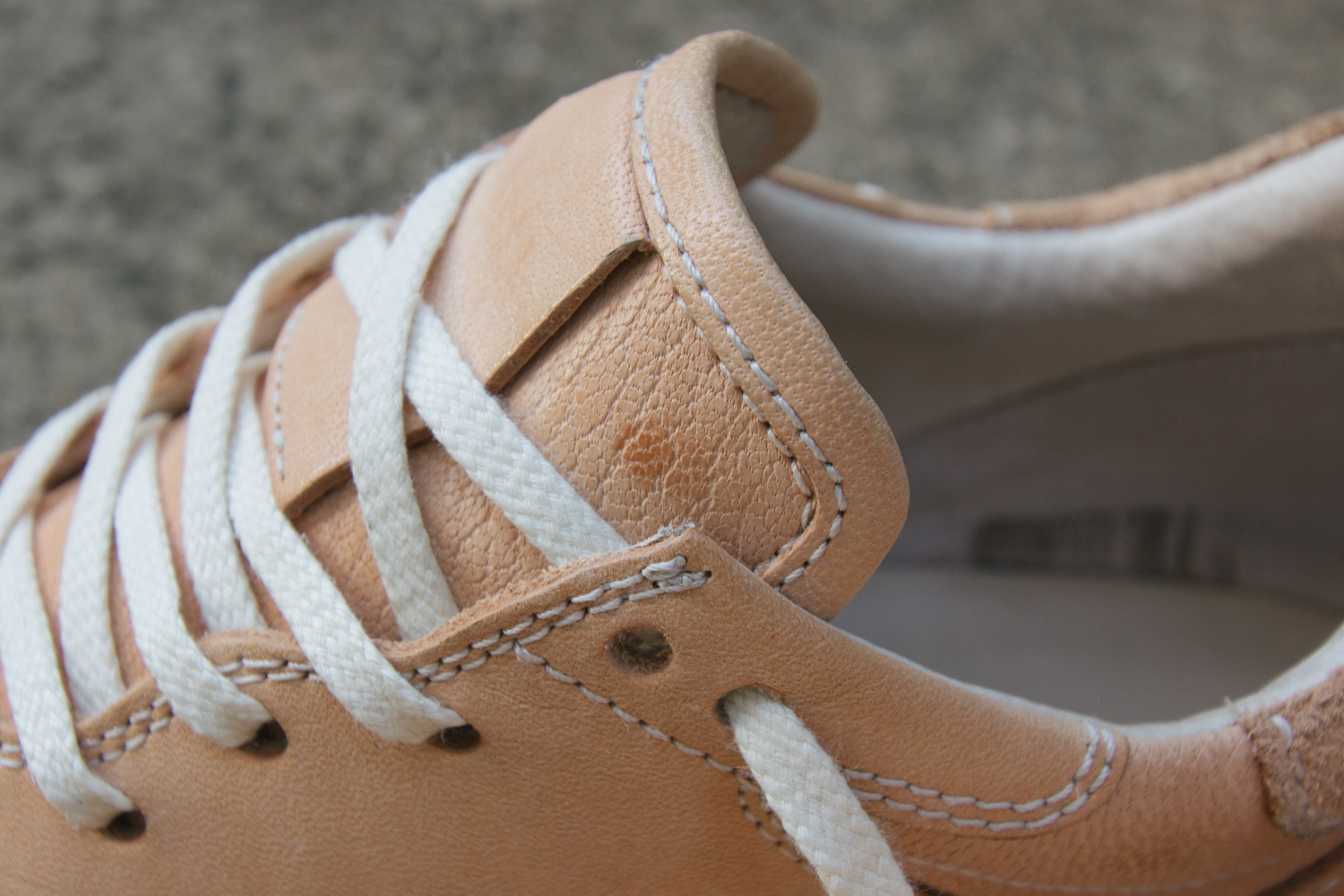 The obvious downside to the leather’s un-tanned state is that dirt and moisture in large quantities (read mud and puddles) will leave their mark on them forever. Whilst some might not care about that it’s resulted in me being the extra bit paranoid when heading outside even on a summers day although even some construction bursting a water main sending hundreds of litres of water 5m into the sky seems to have avoided ruining them so I should relax a little. That’ll be the day someone spills a pint of Guiness on them I’m sure. Needless to say these aren’t exactly a “going to the pub” shoe but they’ll cope with just about anything given that you’re willing to risk the leather soles on carpet/tiles/polished wood. 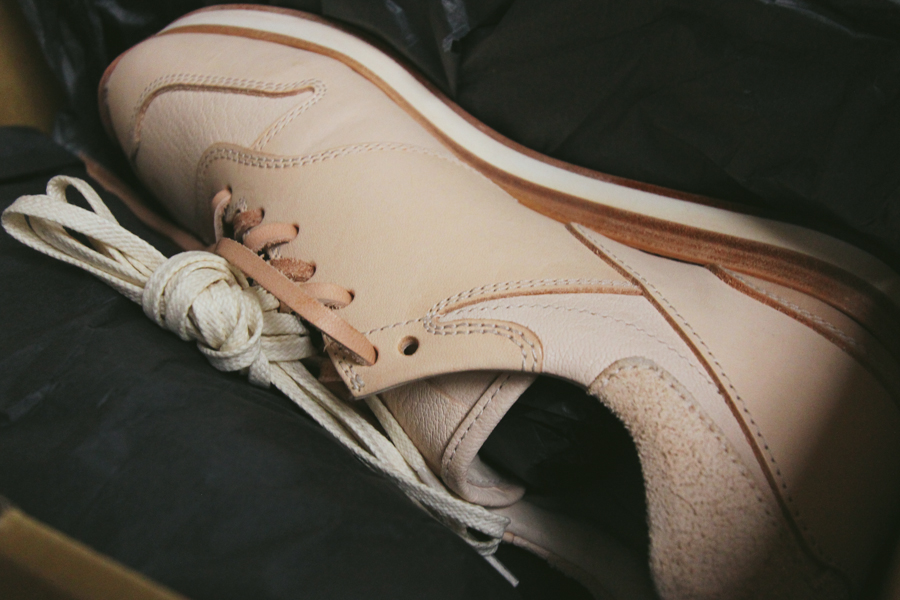 The price point is often the main thing that many will be turned off Hender Scheme’s footwear by and I can understand and appreciate why that would be so. Given the amount of money I’ve spent on footwear though it’s not that outrageous if it’s a pair that realistically is unlike any other piece of footwear out there and homages a brand that I’ve spent tens of times more on in a way that they would never be able or willing to do. That and they’re pretty badass. The quality is fantastic, but it’s a quality that has little appreciation in this day and age where everything has to be pristine and box-fresh. Instead the quality in the Hender Scheme product lies in the nature to be worn and loved for many years and improve with every single bit of use, something that many pieces of footwear; be they high-end luxury or cutting-edge performance seem to lack. 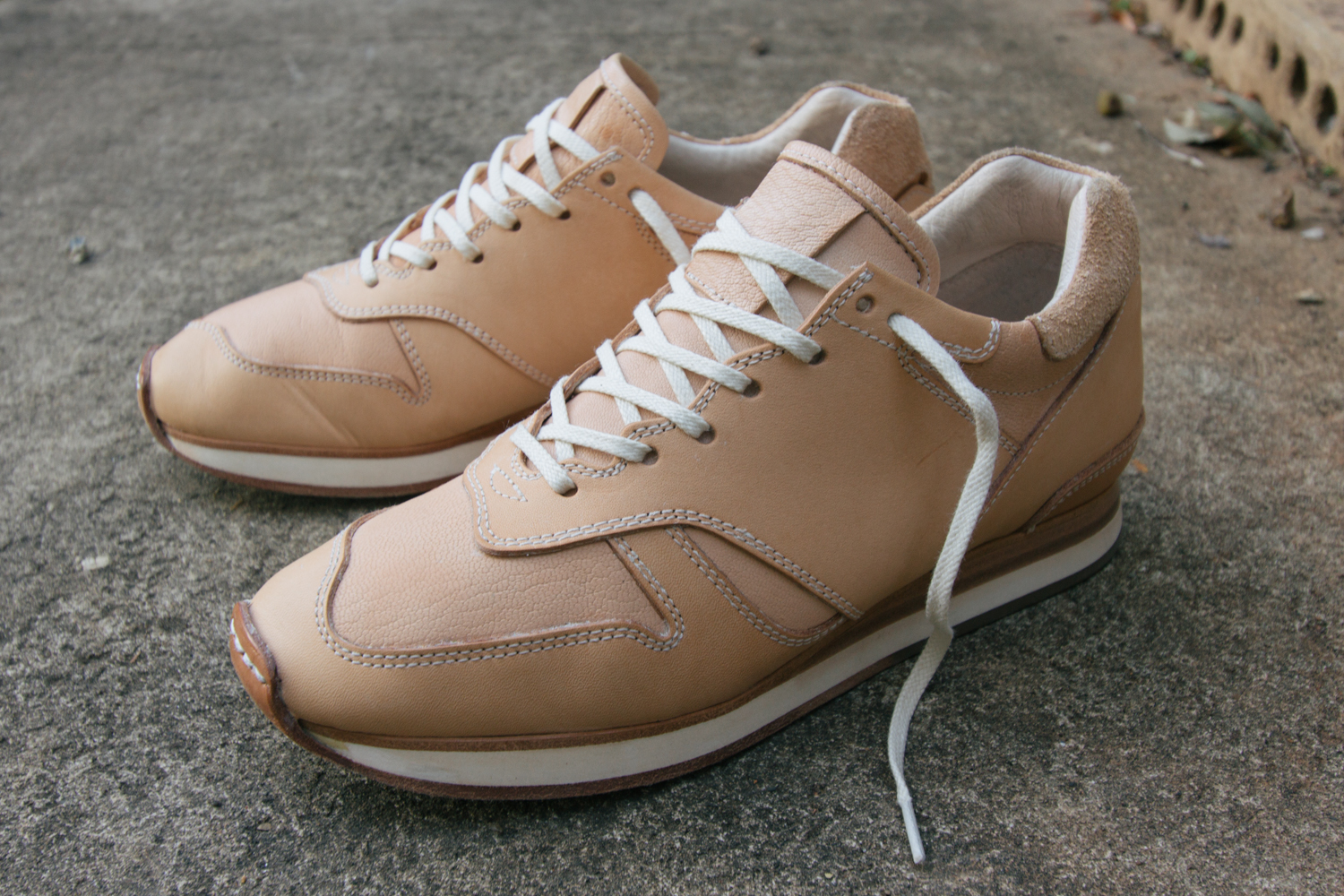 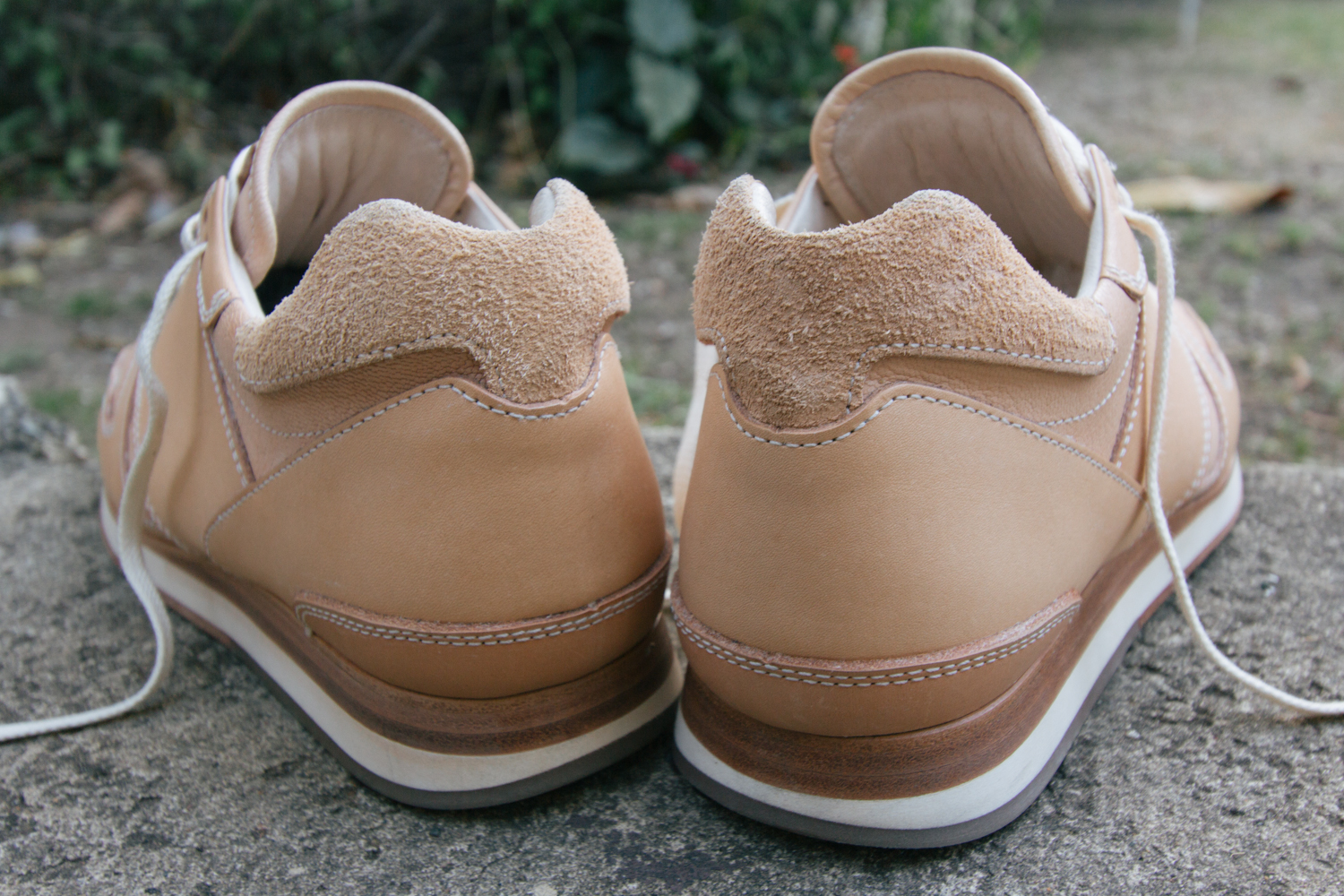 I started writing this as simply a space-filler for the site feeling that I’ve been lazy and a new post might reinvigorate some sort of effort but it’s turned out to be more of a love letter to a pair of shoes and a brand that I’d have never envisioned myself wanting let along owning 5 years ago. I guess times change and age brings new perspective on lots of things but given than I’m still spending a good portion of my wages on footwear (including the Air Command Force most recently) I doubt that has changed much, instead it’s a proof of just how good Hender Scheme have done on these. I just wish they made this waterproof pigskin bucket hat in my size… 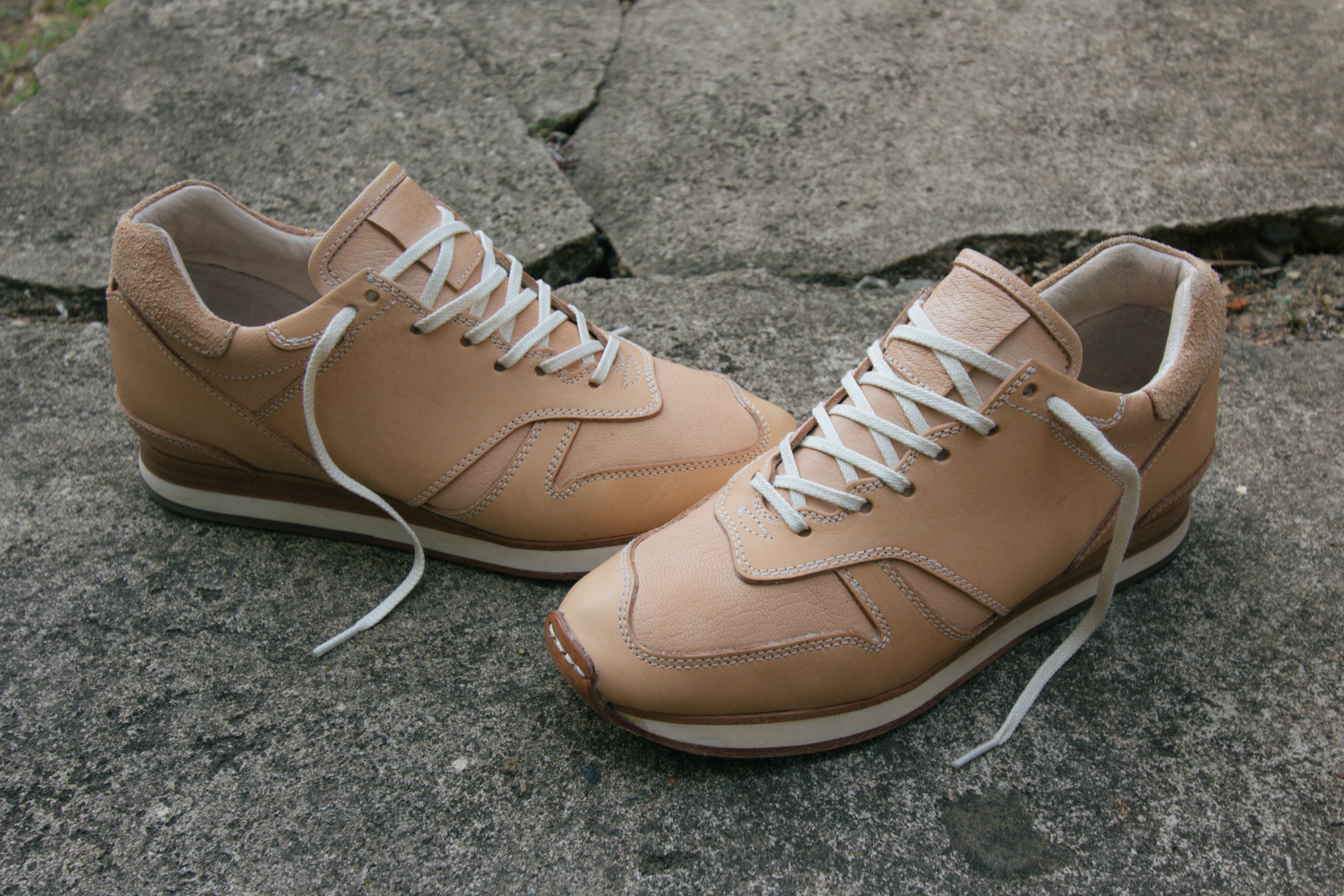